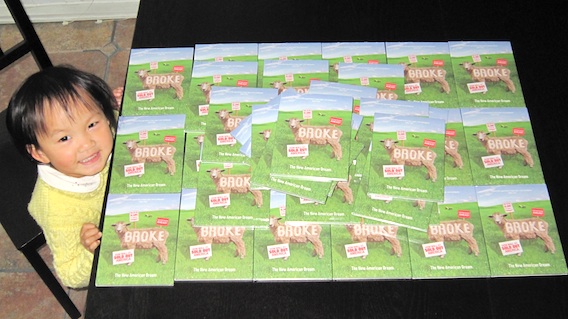 This morning, the mailman dropped of a box with over 40 Broke DVDs in it. Needless to say, I’ve never been this broke before. Broke is a movie by Michael Covel on how America went broke and who’s to blame. It’s a really good movie and I enjoyed it a lot.

Michael Covel traveled 75,000 miles in the making of this film. He did face-to-face interviews with financial gurus; from Nobel Prize winners to professional poker players to fund managers. From big Wall Street names to real estate agents to ordinary citizens, Covel asks the critical questions: how did we get here and what can we do about it?

Broke: The New American Dream also cracks down on the media influence upon money decisions. It nullifies media hype and Jim Cramer propaganda. It takes a hard look at the state lotteries and draws remarkable parallels to the Social Security system. Most importantly, this film is about hope. We don’t have to behave like sheep and we don’t have to go ‘broke.’ Active and mindful audiences will discover that there is a way out.

Who Want To Be Broke?

While I’m sure no one wants to be broke, I bet many readers will want a copy of Broke. Well, you’re in luck because I’m got to give all these copies away. The first five copies are going to the readers who beat me in that Halloween Slot game. The next batch will go to everyone who shows up to this week’s Dot Com Pho. It may not be as nice a gift as Apple giving us new Macbook Pros, but it’s better than nothing!

If you want a copy of Broke but can’t make Dot Com Pho, then simply reply to this blog post. I’ll draw a few winners this Friday and announce them at Dot Com Pho. Good luck!