For this episode of the dot com lunch, we decided to try out the gourmet burgers at Splitz Grill on 4242 Main Street in Vancouver. Splitz Grill started in Whistler back in 1997 but didn’t expand into Vancouver until January 2008. Since opening the Vancouver store, Splitz Grill has enjoyed a nice loyal clientele who don’t care about their weight or heart condition.

The burgers at Splitz Grill makes a McDonald’s Big Mac look like a kid’s meal. They’re made to order and are available with a nice selection of toppings. We all went for the legendary Splitz Burger, which are available as a single, double or triple patty. Greg Morgan and Gary Ng wimped out and ordered a single while Stephen, the human garbage dump, went for the triple stack, which featured 1 pound of beef! I went up the middle with a double stacker.

The burgers at Splitz Grills are quite good but I found them very salty. I also think there’s MSG in their seasoning mix because I felt awfully thirsty after. That might explain why I went for a Splitz ice cream afterward even though I was stuffed. Stephen, trying to prove he was a fat man in a skinny body, went for a full blown banana split after consuming his triple burger and fries with gravy. 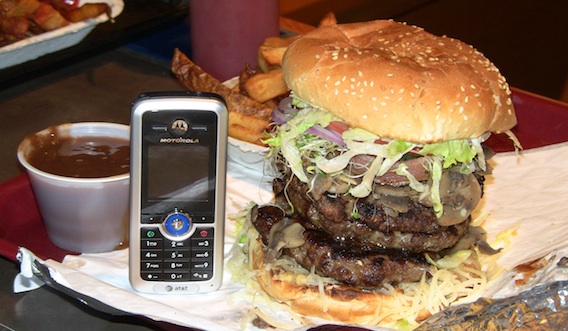