Over the years, I had the fortune of meeting and becoming friends with some very big super affiliates. Guys like Zac Johnson and Jonathan Volk are pretty well known because they maintain very popular blogs. Then there is my friend Aymen. Chances are, you’ve never heard of him. This is because Aymen is of those super affiliates who likes to maintain a low profile. And when you’re making over $100,000 a DAY, I can’t really blame him. Aymen doesn’t take pictures, doesn’t do interviews and I’m not allowed to tell you if Aymen is his first or last name.

I first met Aymen at the 2008 Affiliate Summit West in Las Vegas. We’ve kept in touch over the year but in the past few months, I’ve been seeing a lot more of him because he recently moved to Vancouver. Aymen purchased a suite in Vancouver’s tallest building, the Shangri-la. The first thing he did after landing at Vancouver International Airport was take a taxi to the nearest Audi dealer so he can pick up a new R8. When you’re making over $100K a day, a car is just an impulse purchase.

It was over dinner at Gotham Steakhouse that Aymen was telling me about how sleazy the world of Internet marketing can be. That recent post you read on Tech Crunch, the one about the affiliate scams being run on social gaming, that’s not even the tip of the iceberg. During dinner, Aymen told me he was going to write a report that will expose the dark side of affiliate marketing. That report, titled The Arbitrager – Sex, Drugs, and Lazy Internet Millionaires, is now available for download. The best part. It’s FREE! 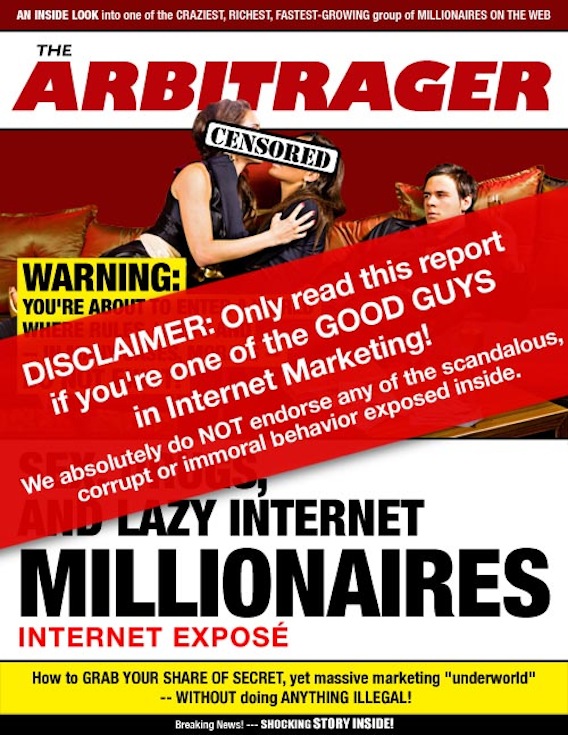 Nobody has ever revealed anything like this before. Aymen has spent this entire year immersing himself in a dark underworld very few people even know exists. This report is not for the faint of heart. It contains sordid stories and details that are quite alarming, to say the least. It was one of the most eye-opening reports that I’ve come across in a long time. I can’t imagine being without this information. I recommend you grab a copy right away. Aymen is sure to ruffle some feathers with this report and I wouldn’t be surprised if he’s forced to take it down.