If you’ve been using Twitter for any length of time then I’m sure you’ve come across the Deny/Allow screen you see above. Twitter OAuth is an authentication protocol that allows users to approve application to act on their behalf without sharing their password. The only problem is once you click Allow, the site using OAuth pretty much have total control of your Twitter account. They can make you tweet out messages to followers. They can even make you follow anyone without your permission.

Now, the majority of sites that use OAuth, like Sponsored Tweets, use it for legit reasons. However, it’s not hard to see the potential security problems this can create. For one thing, Twitter has no application process to use OAuth. Anyone can create a Twitter service with OAuth, including hackers and spammers. This is why Twitter has that note on the right which reads:

Please ensure that you trust this website with your information before proceeding!

My theory (and it’s only a theory) on how this is happening is someone is using OAuth to make Twitter users follow me to get my account banned.

How To Break The OAuth Connection 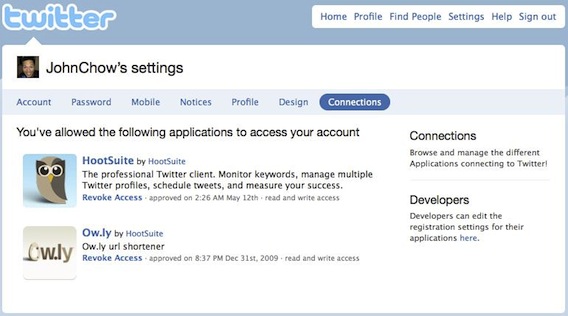 The page will list all the site that are allowed to connect to your Twitter account. Don’t be shock if you see a site that you don’t know. If you don’t know the site, break the connection right away by clicking the “Revoke Access” link.

For the Twitter users who sent me messages saying I’m forcing you to follow me, I ask that you go to your connections setting and revoke access to every connections you have. This will make sure no sites have access to your Twitter account. I also recommend you change your Twitter password. Hopefully, the answer to all this is someone abusing OAuth to try to get me banned. If the forced follow is not from OAuth, then Twitter has a major security flaw on its hands.