Taste BC and Help BC Children’s Hospital 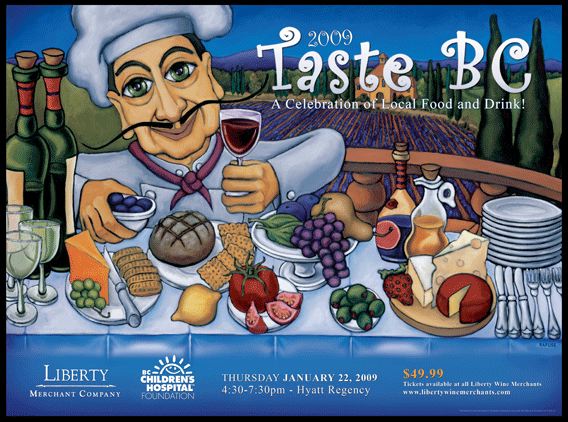 What can be better than a night of fine wine and food? How about a night of fine wine and food with proceeds going to help the BC Children’s Hospital? Well, that’s what will happen at the second annual Taste BC by Liberty Merchant Co. With Taste BC, Liberty is once again gathering British Columbia’s food and beverage industry in an effort to raise money for the BC Children’s Hospital â€“ Oak Tree Clinic.

The second annual celebration of local food and drink takes place January 22, 2009 (4:30-7:30 p.m.) at the Hyatt Regency Hotel in Vancouver. Event goers will not only indulge in tastings from some of the finest restaurants, wineries, breweries and cheese purveyors in BC, they will also benefit one of the province’s most vital medical institutions.

Liberty launched Taste BC in 2008 after successfully running the BC Wine and Oyster Festival for 13 years. All proceeds from that event were also donated to the Oak Tree Clinic, which specializes in providing care and services to sufferers of HIV/AIDS.

With the advent of Taste BC, Liberty is able to broaden the number of participants and potential patrons who can help the charity. The funds raised from the inaugural Taste BC event and its predecessor total $159,515.77. With the 2009 Taste BC, that figure is sure to rise considerably. Along with the great food and drink, the attractions include live music, door prizes and a silent auction that features luxury items, including local experience packages and delicious products made by British Columbia’s own.

“I know dieting is a new year’s resolution for everyone, but I think all of us would agree that Taste BC is one event the diet can be put on hold for. Not only is it a gastronomical celebration of all that’s great about British Columbia, the gathering also benefits people in our community who need our help more than ever,”
Regan Schwartz, Liberty’s Director of Marketing.

Tickets for Taste BC can be purchased at all Liberty locations for $49.99 each. Remember, all proceeds goes to the BC Children’s Hospital â€“ Oak Tree Clinic. What a great way to have a night out and help those in need. I hope to see you there!