TechCrunch recently ran a story about my arch rival Shomoney suing an employee of Google for violating the AdWords T&C.

About four months ago, shoe noticed ads for â€œShoemoneyâ€ that point to the domain myincentivewebsite.com. Shoe’s attempts to contact Google and the offending parties went unanswered (so did a C&D). It took a court ordered subpoena to find out who the owner of the site was because the domain was set to private. 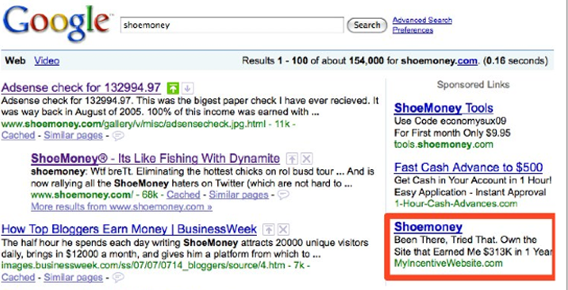 With his real name in hand, Schoemaker finally managed to get in touch with the alleged violator. The defendant claimed to be unaware of any breaches of Google’s Terms of Service or the Shoemoney trademark. Schoemaker isn’t convinced, stating that â€œhe played dumb every time and was very deceitful with his responsesâ€. To make matters worse, the defendant attempted to clear his name by sending Schoemaker a screenshot of his account featuring a list of keywords he was targeting – a list that Schoemaker says was incredibly similar to his own.

His Name Is Keyen Farrell

I decided to do a little more digging into the case and found out the person Shoe is suing is Keyen Farrell and his farther, John Farrell. A source, who shall remain nameless, forwarded me a copy of the Shoemoney complaint. You can read it here (right click and save as).

It appears the Keyen Farrel is an employee of Google. His profile at LinkedIn states that he is an AdWords Account Strategist. However, the title has since been removed. Mr. Farrell was featured in this article stating he makes up to $45,000 per month bidding on Google AdWords.

If Mr. Farrell is indeed a Google AdWords employee, then he must know that you can’t bid on trademarked keywords. Also, the keyword Shoemoney has already been placed into Google’s filter so it won’t show up in an ad. It would require someone with inside access to be able to circumvent it. The fact that Mr. Farrell’s keyword list is very similar Shoe’s may mean he used his position at Google to take a peek at Shoe’s keyword list.

I am unclear as to whether Google has a policy that prevents its account strategists from bidding on AdWords. If it doesn’t, it should definitely put one in place. The conflict of interest is pretty clear and the abuse of power can be pretty high.

If Mr. Farrell does indeed work for Google, I have a feeling he won’t be working there much longer. That will be the least of his worries once Shoe gets done with him. I’ll add to this post as the case develops.