Results of Leveraging The Power of Networking

The Power of Networking

There was once an online reality show where it brought in a bunch of strangers into a small room and allowed them to battle to the death. Well those days are gone now and did anyone learn anything from such torment? Have anyone remembered the contestants? Did they talk to each other after such show?

The prior statement is geared towards people who meet strangers. Do they use them to their advantage later on or do they ignore them once they meet. Do they just hi and bye to one another or do they network later on? Networking is a very powerful aspect that not many use to their advantage.

I personally try to network with everyone and try to use them to my advantage, it is called leverage. Leveraging someone else’s knowledge with your is very powerful. Better yet if you are new, leverage their knowledge to your advantage and learn.

Leveraging The Power of The Network

More recently I have partnered up with Jani G, which I met through an internet reality show. We have been keeping in contact with each other but really never worked together. I have posted several things about twitter in the past and Jani actually mentioned to me about creating a Twitter Power book. I thought to myself why? Twitter is so easy to use.

I figured from a marketing standpoint that twitter marketing is self explanatory. Jani explained to me about several people using twitter for marketing but in a spammy useless way. I personally love twitter and really hate spam retweets.

When Jani brought this idea up, I was already creating a twitter tutorial for users on how to make money from twitter. But Jani gave and provided a bigger picture to me and it all made sense.

Jani has made a lot of successful products in the past. While we were at an internet reality show he showed us his products and his products definitely differentiate himself from the others out there. So with his success and mine, I decided to take up on his idea. We collaborated for bit and definitely had snags prior to our product launch.

But we manage to handle it and definitely build a huge list and followers in promoting our new Twitter Traffic Exposed ebook and video tutorials. With his knowledge on pre-selling and product launching we managed to have a huge success on launch. I myself have launched products in the past but Twitter Traffic Exposed was one of my most successful launches.

The reason for this is because I personally leverage Jani’s expertise in product launching. He provided a lot of insights to promotion and I definitely learned a lot from his promotion skills. Such networking is important because you learn and become successful.

After the internet reality show, I did not ignore anyone from the show. I kept in touch with everyone in hopes to try to leverage them later on. I do not just go to conferences to talk and just network, but I network! I talk to many people and try to see if they can benefit me in a way, remember everyone knows something you do not know.

It’s Not What You Know But WHO You Know

This applies to the online world as well. So I always try to find someone that can benefit me. Once a relationship is establish then you can easily discuss topics you wouldn’t think you would discuss about in the past.

When I partnered up with Jani in creating Twitter Traffic Exposed, we did a lot of things differently, especially ways how I promote or create a sales page. So it was definitely a learning curve but in a good way. Also, we pushed each other to do more than what is needed. Sometimes I get lazy at times and skip out on a task but Jani is there to remind me. I also seem to have ADD since every time I think of a new idea I get off topic, but Jani reminds me if I completed the tasks we discussed about. I of course do the same to him when he is slacking.

Results of Leveraging The Power of Networking

What is the result of our partnership and leveraging each other’s marketing skills? Well it resulted in a successful product launch! Below is a screen shot of my Thunderbird inbox from the sales of Twitter Traffic Exposed. 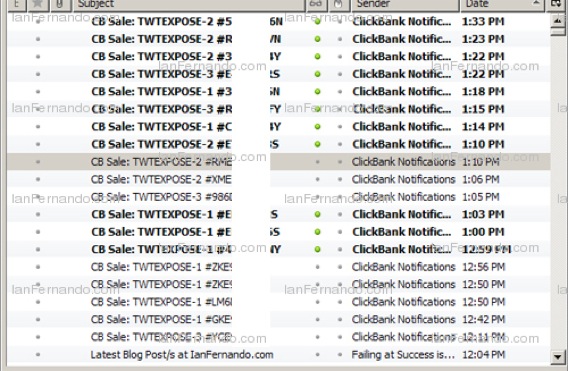 As you can see almost every five minutes there is a sale happening. It isn’t a million dollar product launch like John Reese would have made it but it produced immediate cash flow. After launch I literally watched the tracking and watched my inbox just flood with notifications. I provided feedback to Jani and he too was watching the results come in and come out.

The power of networking will result into a huge return if you know how to network the right way. Jani and I were talking back and forth and it was not till recently we decided to partner up and create a powerful tutorial and video system to others. I did not just ask Jani nor did him; we kept a relationship and talked online. This built an immediate trust between us and gave us the ability to use the power of online marketing to make a huge profit.

With our minds combined we were able to have a successful product launch for Twitter Traffic Exposed than most. Together we gathered a bunch of new affiliates and we built a big list together which we can benefit later on. The moral of this post is to not just network but leverage and create a meaningful relationship with everyone you meet. You do not know when that person will come in handy or if they will come in handy to you!