Woo hoo!!! My new book just hit #1 on the New York Times Best Sellers list!! Thanks to everyone who pre-ordered the book! This couldn’t have happened without you! Here’s a copy of the press release that my publisher just sent out on the news wire.

NEW YORK, New York. (April 1, 2010) â€“ Morgan James Publishing, is pleased to announce that Make Money Online: Roadmap of a Dot Com Mogul by John Chow and Michael Kwan, has hit number 1 on the New York Times Best Sellers list. What’s even more amazing about this accomplishment is that the book isn’t even out yet. This is the first time in NYT history that any book has made the Best Sellers list on pre-orders alone. 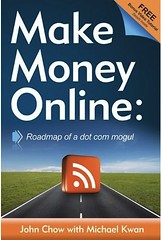 “I can’t believe it! I knew I had a loyal readership but I didn’t expect them to show this much support. It’s amazing!” said John Chow from his home in West Vancouver. Michael Kwan fainted when he heard the news and wasn’t able to comment.

Make Money Online: Roadmap of a Dot Com Mogul doesn’t hit bookstores until May 1 but retailers have been swamped trying to keep up with the demand. Jeff Bezos, founder and CEO of Amazon.com said, “Never before have we seen this level of interest for such a niche product. Reaching one million pre-orders a full month ahead of release is quite the accomplishment. A well-deserved kudos goes out to John Chow and Michael Kwan.”

To help meet demand for Make Money Online: Roadmap of a Dot Com Mogul, Morgan James Publishing has added two extra shifts to their printing plants to make sure every book outlet has enough copies on opening day.

About John Chow
John Chow (www.JohnChow.com), a damn fine person, friend of the community, Ultimate Fighting Championship contestant, member of the Save the Whales Foundation, the man who controls the black market on baby seal pelts and member of the â€œprobably yo’ daddyâ€ foundation. New York Times besting selling author.

About Michael Kwan
Michael Kwan (www.MichaelKwan.com) is a freelance writer based out of Vancouver, British Columbia, Canada. He graduated with honours from the University of British Columbia with a degree in Psychology and English Literature. During that time, he worked as a contributing writer and co-editor for Arts@Work, the official newsletter of the UBC Arts Co-op Program. Today, Michael’s freelance work is mostly found online with a focus on professional blogging and technology reviews.

If you’re one of the few who hasn’t reserved your copy of Make Money Online: Roadmap of a Dot Com Mogul yet, then you better do it now to ensure you get your copy when it launches next month. To everyone who already ordered, thanks again. The drinks are on me!