Meeting Up with Garth Turner 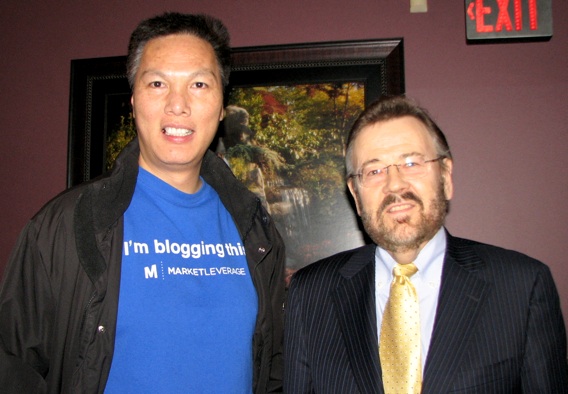 Garth Turner is a best selling author, blogger, public speaker, financial commentator and former Member of Parliament for the Conservative Party of Canada. Garth Turner’s style is that of the rebel and that got him into a lot of trouble. So much trouble that the Conservative booted him out of the party on live TV and he ended up being a refugee Liberal.

Now a days, Garth flies around the country and tell rooms full of people that the sky is falling. The only problem is, he maybe right. Garth writes most of his ramblings at Greater Fool, a blog about the trouble future of real estate. Garth’s newest book, After the Crash, offers advice and strategies to deal with the current real estate mess.

I had a chance to meet up with Garth Turner at the Northview Golf Club. He was there to give a keynote presentation to packed room of concerned home owners. The reception Garth received wasn’t exactly heart warming but that was understandable. After all, what home owner want to hear that the value of his house is going to drop a minimum of 30% this year and that will put his mortgage under water?

I actually enjoyed Garth’s speech. I like his no BS, cut to the point, matter of fact style. Mind you, nothing in his keynote made me change my mind about my current investment strategy. However, my wife now wants to sell off all of our real estate holdings. Thanks a lot Garth!

Garth is a great example on how to use a blog to make money indirectly. Garth’s blog doesn’t have any advertising other than his own books. However, what the blog does well is sell Garth Turner as a public speaker. I’ve been paid as much as $1,000 plus travel and lounging to be part of a panel. I would imagine giving a keynote commands a lot more. Garth made seven keynotes during his BC trip. I’m sure that’ll cover next month’s rent.