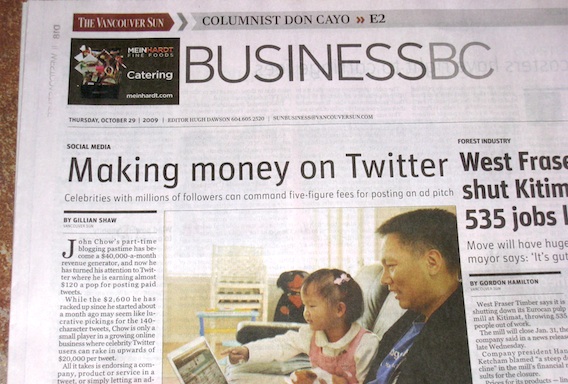 The Vancouver Sun, the city’s largest newspaper, has featured me on the cover of today’s Business BC section. The topic was making money on Twitter. Specifically, how new services like Sponsored Tweets and Ad.ly are allowing Twitter users to monetize their Twitter streams.

Since I started with Sponsored Tweets a month ago, I’ve made nearly $2,600. I expect Tweet income to hit $6,000 next month with the addition of Ad.ly to the mix. This really is the easiest way to make money with Twitter. It only takes a minute to write a Tweet (less than that if the advertiser writes it for you). I say I spent a grand total of 20 minutes writing the tweets that made me $2,600. That works out to $7,800 an hour! Even if you only make $5 a tweet, you can create a rate of $300 an hour for a one minute tweet.

If you want to start making money with Twitter, you should join Sponsored Tweets and Ad.ly. Then go read my 10 Tips To Make More Money with Sponsored Tweets. It will show you how to maximize your Tweeting income. In my January 1 post on How To Make 2009 Your Best Blogging Year, I said you needed to get on Twitter. Now you know why.