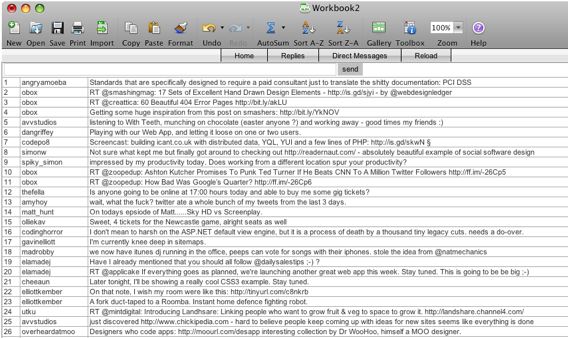 If you’re one of those people who are absolutely addicted to Twitter (you know who you are) then no doubt you have tried to tweet from work. The only problem is Twittering from work isn’t exactly the most productive thing you can do on company time. And no doubt it wouldn’t go over very well with the boss. If your office has a work like a slave and don’t you dare Twitter in the office policy, then SpreadTweet is for you!

SpreadTweet is a Twitter client disguised as a spreadsheet! You can choose between Office OSX (shown above), Office 2003 (Windows) and Office 2007 (Windows). The boss will think you’re working hard on a big project when you’re really just goofing off and running the company into the ground because all you’re doing is Twittering.

All your tweets are displayed in plain text down the SpreadTweet page. You send a tweet by typing message in the top textbox and hitting the send button. There’s even tabbed views along the top so you can check your replies and direct messages, making SpreadTweet a relatively complete Twitter package.

Don’t blame me if you get fired!