Unless you’ve been living under a rock, you’ve no doubt heard of Twitter. It’s hard not to notice something that is being used by CNN and the President-Elect. Many people still don’t understand what Twitter is about. However, as an Internet marketer, I can tell you that Twitter is one of the best Internet marketing tools ever created and if you’re not on it and using it, you’re missing out big time.

While some have tried to make money directly off Twitter, the best way to profit from Twitter is indirectly. You see, Twitter is a great traffic source. If have a big following, you can leverage it by using Twitter to send traffic to your blog or other offers. The key is to have a big following. Here are some methods I’ve used to help build my Twitter following.

You need to get to 100 followers as fast as possible to avoid negative social proof. People don’t want to follow someone with no followers. That is just a fact of life. A Twitter account with zero followers is negative social proof. Unlike RSS, you can’t hide the number of followers you have – it’s clearly visible on your Twitter home page. You need to get that number up and the fastest way to do that is by following users who will auto follow you back.

How do you find these users? A tell tale sign is by checking their Twitter home page. If the number they follow is about the same as the number following them, chances are these users will follow anyone who follow them. Once you build up your followers to over 100 using this method, you can use the other methods to build a real follower base.

Most people use Twitter to keep up with friends and family. If you wish to build a following beyond that, then you will need to make more interesting tweets than, “I’m walking the dog.” You can still make those kinds of tweets and there’s nothing wrong with them. However, you should also keep the demographics of your followers in mind and try to cater to them.

Being interesting also means interacting with your followers. If they send you a question or direct message, you should answer it. You’ll be amazed by the amount interaction Twitter creates. It can be addicting so keep your goals in mind.

The first thing you should do when you set up a Twitter account is to upload your photo. I’m still amazed at the number of users who are still running the default Twitter icon. Having your photo in your tweet puts a face to it and makes you connect more with your followers.

Another thing you should consider is adding a custom background to your Twitter home page. It doesn’t have to be as fancy as Darren’s but anything is better than default. 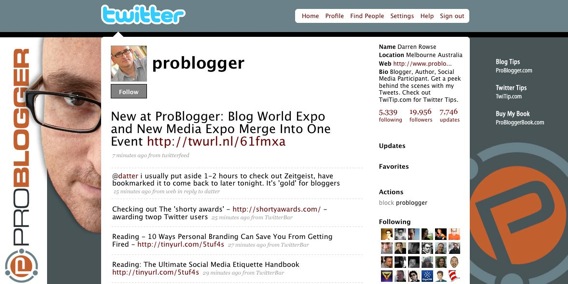 Get To Know The Hashtag

One way to to get new like-minded followers is by taking advantage of the hashtag to give your tweets more exposure.

Hashtags are a community-driven convention for adding additional context and metadata to your tweets. They’re like tags on Flickr, only added inline to your post. You create a hashtag simply by prefixing a word with a hash symbol: #hashtag.

For example, I’m going to the Best of 604 awards reception tomorrow. By making tweets with #bestof604 in them, I expose myself to anyone following the tag #bestof604. Hopefully, they check me out and follow me. You can also use a service like Twitscoop to find out what the hot topics are and join in. If people like what you’re saying, chances are they’ll follow you.

Add Your Recent Tweets To Your Blog

The more exposure you have for your tweets, the higher the chances that people will follow you. If you have a blog, you should definitely take advantage of it by showing your tweets on the sidebar. The Twitter Tools WordPress Plugin by Alex King will pull your tweets into your blog and create new tweets on blog posts and from within WordPress.

Give Your Followers Some Love

Another way to give love is by offering a free item to anyone who follows you. SitePoint did this by offering a free 200+ page eBook on CSS if you follow them. They use Tweet Later to direct message the URL of the ebook download to the new followers. Using this method, SitePoint was able to acquired over 13,000 followers in only a week.