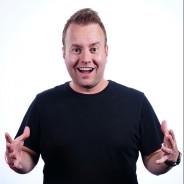 Over the past month I’ve been pushing hard to get interactions on my @Organize Twitter handle. Â One problem though, I’m a brand… and nobody wants to follow a brand on Twitter. Â I guess it’s not cool. Â In this post I’ll teach you some of the strategies behind one of the strongest and most interacted handles on Twitter @notebook.

Branden Hampton has become a good friend of mine over the past month as he’s one of the leading experts in Twitter marketing. Â He puts up a tweet and gets LARGE amounts of interactions. Â Literally, he tweets 30+ times a day and each ones get’s 2500+ interactions on. Â I had a chance to sit down and interview him. Â Not only will I teach you how to get massive amounts of Twitter interactions but I’ll teach you how to make money on Twitter. Â Enjoy!

How do I advertise as a Brand? As a brand on Twitter the most important thing to remember is that in your social presence you, are no longer your company; you’re merely a specialist in your industry. If you educate your potential customers on your industry in general, they’ll look to buy from you when it’s time to spend money your space. Â Basically, you are no longer a brand, you should be an expert in your industry and help people out.

An example being, if you’re, say, an engagement ring company, instead of constantly blasting your merchandise 24/7 like most companies do, instead you post useful information for wedding planning, checklists, tips and tricks and such; then when they think “WEDDING RING TIME” … BOOM, you pop into their head because you were helpful for the rest of the process and gave them tons of valuable information and asked for nothing in return.”

We create properties around topics that we can organize people in by interest; lets use sports and movies as an example. If we can create an account that would attract sports lovers as followers, we can then go in an advertise to that audience based on the knowledge we have about sports fans. Same with movies, if we find someone who is an avid movie person, it’s easy to find out what might appeal to them in terms of advertising.

What is one Twitter tip or trick that you’re willing to give away to our readers that most wouldn’t know?

A lot of the large accounts use automated software to tweet; it’s not always a live person tweeting. If you can put 10 pieces of content into your automation software at the beginning of the day, you can tweet 10 times today without ever logging on again. This keeps your followers active and engaged, and helps with growth.

There’s a lot of people that use Twitter as publishers and they just don’t understand how things work, start to finish. All they care about is the money, and that will eventually catch up to them. They ruin their influence and kill their engagement by misleading followers, defrauding advertisers, and much much worse. The lack of professionalism in social media publishing is horrific.