Yesterday, technology blog Gizmodo posted a story that they got their hands on the next Apple iPhone. It seems the phone was lost by an Apple engineer while getting drunk at a bar. The phone was found by someone and eventually ended up in the hands of Gizmodo after a $5,000 payment.

Now, I don’t want to debate the ethics of how this all went down. What I do want to show is the power of a world wide exclusive story.

Gizmodo managed to obtain an Apple iPhone that won’t be shown for another two months. For a company as secretive as Apple, this leak breaks all records and I really feel sorry for the guy who lost the phone. I can just imagine him facing the wrath of Steve.

The Giz pay $5,000 for the next iPhone. Was that a good investment? You damn right it was! 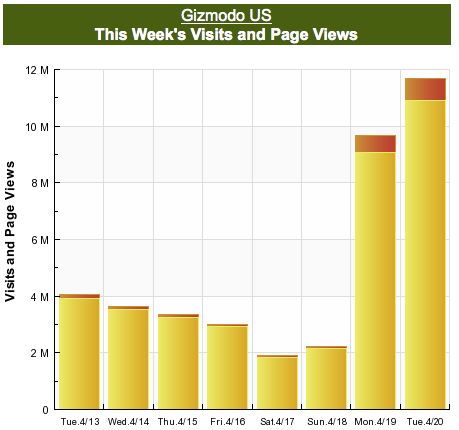 Say what you want about “checkbook journalism,” you can’t argue with that kind of traffic numbers! Gizmodo gets around $30 CPM on their ad sales. Assuming they sold out all the inventory (which I highly doubt), the 20 million views would be worth $600,000. Not a bad return on $5,000.

Here’s a video of the new iPhone. I like it a lot and I’m definitely getting one when it comes out.