In my post on how I automatically back up my WordPress blog I said that I save and pull all my images from Flickr. A few readers have asked how I do this and if pulling images from Flickr was allowed. The answer to the latter is yes, Flickr does allow you to embed images hosted by them onto your blog. As for how I put Flickr images on my blog, there’s an easy way and a hard way. The hard way is to go to your Flickr account to get the URL for the image you want to embed and entering it into your blog post. Here’s the easy way.

The Flickr Photo Album for WordPress will allow you to pull in your Flickr photosets and display them as albums on your WordPress site. There is a pretty simple template provided, but you can customize the templates to match the look and feel of your own blog (See my photo album). 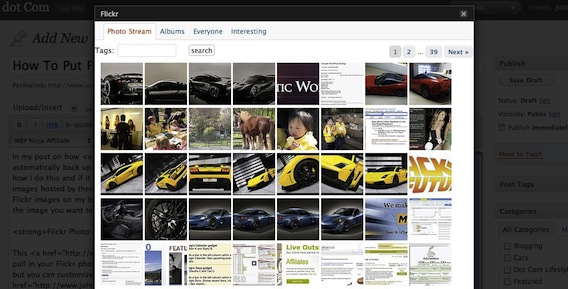 Flickr Photo Album for WordPress is pretty easy to install and use. However, making a custom photo album may require the help of your web designer. Most bloggers either use the supplied template or just link to their photo albums on Flickr. From a branding stand point, it’s better to keep the album on your blog and create a new template that matches your blog’s look and feel.

Having my images hosted on flickr has many advantages. I save on bandwidth and storage cost. Why use up my bandwidth when I can use Flickr’s? Backing up my blog to Amazon S3 with the Automatic WordPress backup plugin cost less money as well since I don’t have to backup the images. Flickr has their own backup system to make sure your images are safe and secured.

Flickr is extremely economical. You are allowed to upload up to 200 images for free. Go above that and you’ll have to upgrade to a Pro account which cost $24.95 a year ($47.99 for two years). The Pro account allows you to upload an unlimited number of images.