six days ago, on April 10, my twitter follow count was at 15,633. At the time of this post going live, my follow count stood at 21,234. You can see what my current count is at my Twitter home page. All these new followers are targeted and interested in blogging and making money online. How did I add over 5K new targeted followers in less than a week? I’m going to show you two methods to add a ton of targeted followers to your Twitter account. The first method is slow and painful but completely free. The second method cost money but is fully automated. Which one you use is entirely up to you.

Have you ever heard the old saying, “If you want someone to smile at you, smile at them first”? Well, the same concept holds true for Twitter. If you want people to follow you, follow them first. If your interest is inline with their interest, then the chance of them following you back is quite high.

You shouldn’t following just everyone. You want followers who are interested in what you’re interested in. So the key is to find those people and follow them. Then engage them to build the relationship. How do you find targeted followers?

The best way to find targeted Twitter users is with the Twitter Search. Enter the keywords for the type of followers you’re after and the search will find users talking about that topic in real time. Follow everyone that shows up in the search results. 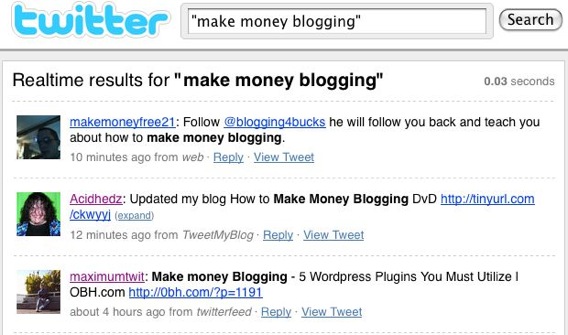 When those users see you following them, they will check out your Twitter profile to see some of your tweets. If the tweets are targeted with their interests, which is should be, the chances are high that they will follow you back. To increase your chance of a follow back, you can engage the users in conversation or maybe retweet a few of their tweets.

While we would like everyone we follow to follow us back, that won’t happen. However, because of the highly targeted nature of this method, you should be able to get a 50% conversion rate.

A Twitter user is interested in making money by blogging and just made a tweet about it. Suddenly, I followed that user because her tweet showed up in my Twitter search. The user noticed I am now following her, goes to check my Twitter profile and read my bio that states I make $40,000 per month by blogging. That made her click the link to my blog. She read a few posts, fall in love with my blog and leave the following comment.

You see how this works now? Now imagine getting 5,000 of these.

After 48 hours (or whatever time limit you set), you need to unfollow everyone who didn’t follow you back. The reason you need to do this is because Twitter places limits on how many people you can follow. Once you hit that limit, you can’t follow any more until you have more followers or remove people you are following.

The above is basically how I added over 5,000 new targeted follows in less than a week. As you can imagine, doing this all manually is extremely time consuming. But if you’re the kind of person who doesn’t want to pay for anything, then that is how it’s done.

Twitter Snipe is a piece of software invented by my buddies, Ian Fernando and Sam Robilotta. The software automates the free method I mentioned in the first part of this post.

The problem with most auto follow programs is they randomly follow people or just follow all the followers of a big Twitter user. Yes, you maybe able to build a big list this way, but how targeted is it? Twitter Snipe allows to enter keywords to find users who are talking about that very topic right now. A list is only as good as its targeting. Having 5,000 followers is worthless if they’re not interested in what you’re tweeting about.

To use Twitter Snipe, you enter the keywords you want to target, enter how many people you want to follow (make sure not to exceed your follow limit), hit go and let the program do its job. While it works in the background adding new followers, you can continue to tweet about your topic and engage your followers.

After Twitter Snipe adds the number of followers you’ve enter, it will wait for a preset time, which you can adjust, and then it will unfollow everyone who didn’t follow back. You can then start the process all over again.

Twitter Snipe sells for $77, which makes it one of the least expensive Twitter automation tools on the Internet. Twitter Snipe helped me build over 5,000 targeted Twitter followers in six days. That list is worth far more than a mere $77. I’m going to be making thousands from it.

If you’re only interested in adding 50 or so follower per day, then the free method maybe the way to go. However, if you want to dramatically increase your Twitter list with new targeted followers, then Twitter Snip is the way to do it.