After taking a break from Pho last week because of Freelance Camp, the crew headed back to Happy Pho for another fun filled and action packed Dot Com Pho. The Dot Com crew in this case was made up of only five members since Stephen Fung and Michael Kwan are in Taipei for Computex. Making it for this week’s episode were myself, Josh Rimer, Pete Quily, Ed Lau and Wolfgang Christl.

This edition of Dot Com Pho features the complete Entrepreneur Heroes trading cards collection. The cards are the work of Evan Carmichael. He came up with the idea to raise money for Kiva, an nonprofit organization that helps entrepreneurs in third work countries. So far, sales of the cards have helped over 1,000 third world entrepreneurs to start their own businesses.

Since I have the complete card collection, I’ve decided to give away the final five packs of cards to five readers. If you want a pack of Entrepreneur Heroes trading cards, simply reply to this post and you’ll be entered. I’ll draw the winners at next week’s Dot Com Pho.

For the Entrepreneur Zombies Edition of Dot Com Pho, we have what Ed Lau thinks of Surrey and Surrey girls, the iPad app of the week which features zombies that can break through doors but not through plants, a great quote by Bill Gates and getting an autograph from Michael Arrington. Enjoy and good luck winning a pack of trading cards! 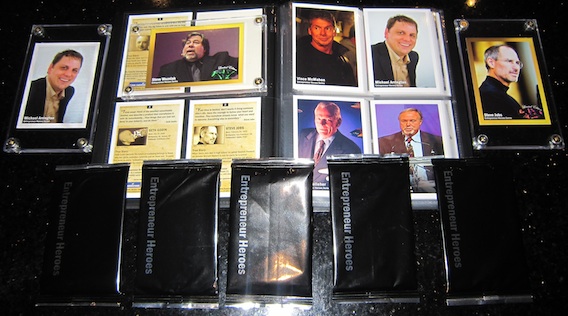