By John Chow May 21st, 2009 Leave a response Ramblings 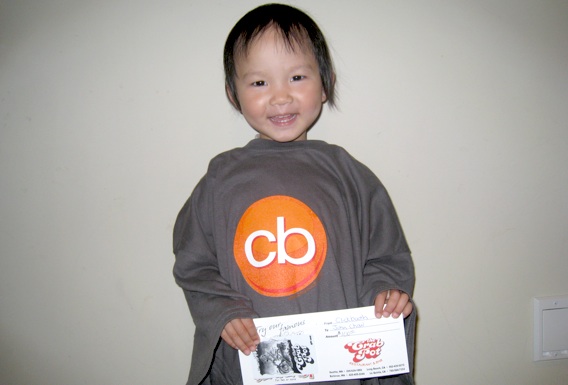 Eric Schechter, the social media manger over at Clickbooth sent me a belated happy birthday gift. Originally, it was supposed to be sent to me while I was in Seattle but they ran into a problem with FedEx. Better late than never, I say!

Eric sent over a really nice Clickbooth T-shirt, which Sally insisted on wearing. It’s a little big for her. Maybe Clickbooth has one in baby size? Sally is also showing off the Crab Pot gift card Clickbooth included with the T-shirt. The Crab Pot is a seafood restaurant in the Seattle area (they have stores in California as well). They’re famous for their seafeast and it’s one of my favorite restaurants.

I should be back in Seattle next month so I think I’ll set up a Dot Com Seafeat get together with some John Chow dot Com readers. If you’re a reader in the Seattle area, dinner is on me! Well, it’s on Clickbooth so you can thank them. Better yet, go sign up with them. They’re a great affiliate network.

Clickbooth recently relaunch their blog and is running a feedback contest. You can win a Flip Mino HD or an iPod Tounch just by giving feedback on their new look.