Anyone who has ever used a current generation Macbook Pro will be instantly familiar with the Magic Trackpad. All the gestures are pretty much the same. The big advantage is the tracking surface. It’s over 50% bigger than the already large surface found on the Macbook Pro trackpad. This allowed a great range of movement and I had no problems going from one end to the other on my 30″ monitor.

The Magic Trackpad allows you to do stuff on your Mac that you can’t do with mouse. Stuff like pinch/zoom or rotate a photo. All the gestures can be accomplished by tapping on the surface. You can push down on the surface and get a click like the Macbook trackpad. The trackpad looks extremely nice when docked next to the Apple bluetooth keyboard. It looks so nice that I’m wondering why Apple doesn’t sell the keyboard and trackpad as single combined device (they can call it the Magic Keyboard). It would be ideal for use in a home media setup. 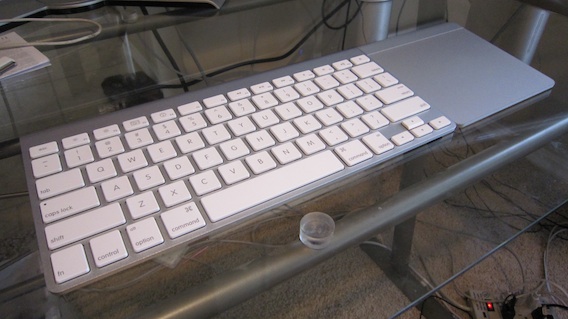 It takes a while to get use to the Magic Trackpad. It’s not as intuitive as a normal mouse. It’s also not as accurate. Many times, I missed the text I wanted to highlight and had to try again. With time, I think one will improve but there’s also a reason why most people buy a mouse to use with their notebooks instead of using its trackpad.

For the Mac user who just wants to be different, and you know who you are, the Magic Trackpad is a great way to stand out from all the other Apple fan boys. However, once the novelty and magic wears off, you’ll be reaching for your tried and true mouse again.