Add Yourself To The One Million Tweeps Twitter Book

By John Chow November 2nd, 2010 Leave a response The Net

One Million Tweeps is a new book made up of one million Twitter users from all over the world. If you’re a Twitter user and want to add yourself to the book, then head on over to OneMillionTweeps.com and do it. The cost is zero. When the book collects its one millionth user, it will go to the publisher for printing and you will be immortalized for life.

One Million Tweeps is the brainchild of @Ludo_Antonov and @Arianna and came as a response to the One Million People project, which favors the social network Facebook. Ludo and Arianna felt that Twitter was a much more vibrant community.

Like I said, adding yourself to the book is free and very easy to do. For businesses or users who wish to stand out more, One Million Tweeps offers the options to purchase a block of square for your Twitter picture. The cost of each block is a one time payment of $5 per block. You can also reserve a block and add a picture later on. I purchased a 3×3 block on the first page at a cost of $30. This is how the first page looks right now. 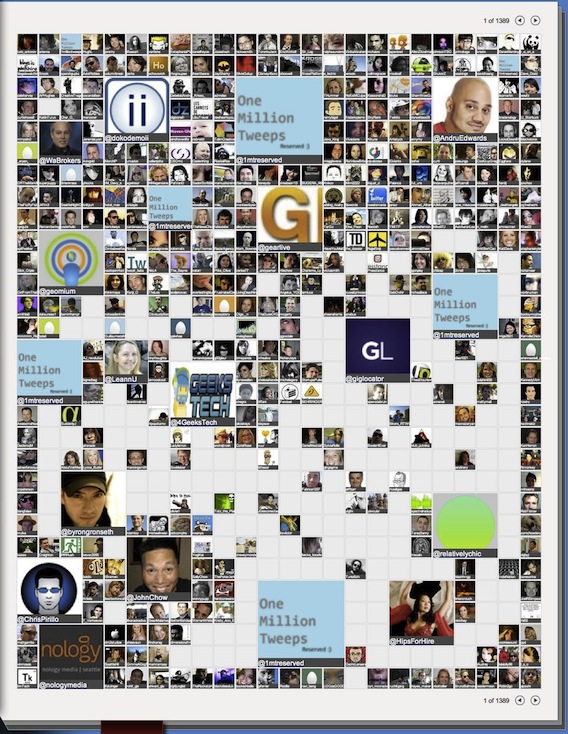 As you can see, it’s filling up fast. I think this project has huge potential to go viral so the sooner you add yourself to One Million Tweeps, the more exposure you’ll get when it shows up on CNN. It doesn’t cost anything to add yourself and only a few dollars if you want a bigger picture. In 20 years, when Twitter has 6 billion users, you can tell your kids that you’re in the famous One Million Tweeps book!

Add Yourself To One Million Tweeps