I had a very simple yet profitable affiliate campaign running. The next step was to try out some of the other e-cigarette companies with affiliate programs. I found another seemingly good e-cig company called GreenSmoke and joined their affiliate program.

I already knew what to do (and not to do) thanks to my prior BluCigs experiment, so I quickly setup my GreenSmoke campaign:

Since I already knew what to do, within about 1 hour I completed most of this work. When BuyGreenSmokes.com went live it looked like: 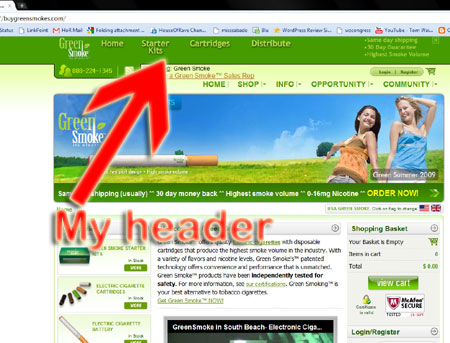 So just like the BluCigs page I made, anytime someone gets to this page through my link and buys something, I make money.

Speaking of the BluCigs experiment, whilst I was making the GreenSmoke page and signing up for other affiliate programs, this small little experiment of mine had been working. I had been making 1-2 sales per day from the Blu campaign, and within a few days here was my revenue: 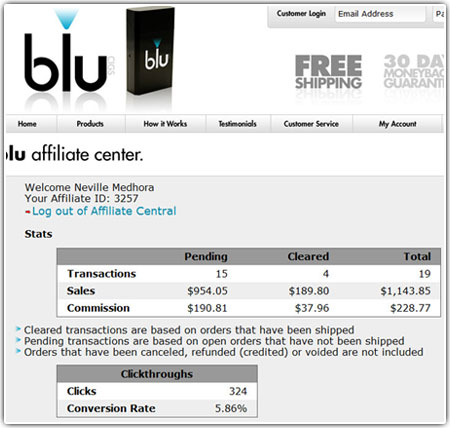 At this time for every dollar I spent on AdWords, I was making $6 back. So a 6X Return on Investment. At this point I had never seen the product I sold or promoted, didn’t know anything about them and wasn’t particularly â€œhelpingâ€ anyone. In fact the people who came through my links never knew who I was or that they were coming through an affiliate.

However in about a week I earned my first check: 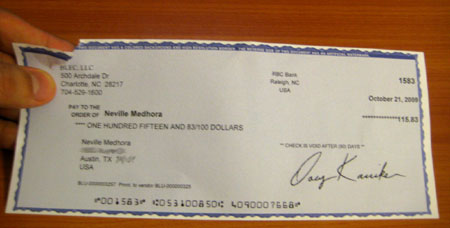 This is a very simple affiliate experiment, and probably against the rules of most affiliate offers. You see, I’m not ACTUALLY adding any value to the companies whose products I’m promoting. They probably would’ve made these sales regardless if I was in the picture or not.

Now lets say I owned a large forum for smokers to talk about smokingâ€¦.then I write an article about how great BluCigs or GreenSmoke electronic cigarettes are. If those articles contained affiliate links that people followed then purchased products, THAT would be of great value to the companiesâ€¦.they just made sales they probably wouldn’t have without you.

REWIND BACK to the first post of this experiment, I was talking about why a lot of affiliate marketers seemed shady.

â€œI can tell them I own a rave store and sell light up stuff online. It’s pretty straightforward, and they can even see the website for themselves. Why were these people acting so shady? They were obviously hiding something or lying about something.â€

From this little experiment the answer became pretty obvious: They don’t want competition.

If I told someone â€œI’m doing this easy affiliate program for BluCigs and making 6X my moneyâ€ â€¦.what do you think would happen REALLY soon??

That’s right, tons of people copying you. Coolâ€¦a little competition never hurt. But what’s different now is since there are other people bidding for your same keywords on your ads, the PRICE GOES UP. Now instead of making 6X my money, I’m down to 2X all of a suddenâ€¦.and if more people start bidding the price up, I might even start losing money soon.

So all of a sudden I’m making tons of cash, then one week later that same campaign is LOSING money. No wonder people keep their mouth shut.

So the first two questions of my original list of things to learn were mainly answered.

Now I wanted to learn about making a good landing page using Google Website Optimizer. This could be something I could use on my other businesses to make more money. All the while I was learning all these new things, I was still collecting about $100+ per week in commissions from this small-time experimentâ€¦. To be continued.

Neville Medhora blogs at NevBlog.com and is the founder of House Of Rave.